Museum of medieval and modern art

Museum of medieval and modern art

The medieval and modern art museum of Arezzo is a pearl of culture and history, located in the heart of the Tuscan city. Easy to reach on foot by public transport, the museum is located in via San Lorentino 8, at the Palazzo Bruni Ciocchi called della Dogana. The palace itself is an integral part of the history of Arezzo, as it was erected at the behest of Donato Bruni, son of the famous humanist Leonardo Bruni. 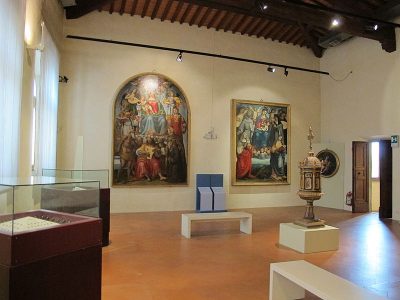 The first attribution of the design of this building had been attributed to the Renaissance architect Bernardo Rossellino, but this thesis was then revised and corrected. Many noble families who succeeded each other in the palace, until the time of purchase by the Tuscan government that transformed it into a large depot serving the city, dedicated above all to the preservation of salt.

The palace became a museum in the second post-war period and has since housed an important collection of artistic works on its three floors, while in the ancient lemon house it houses the laboratory dedicated to restoration.

The museum’s collections are closely linked to the city and its history. Most of the works contained belong in fact to the Fraternity of the Laity, or Fraternity of Santa Maria della Misericordia and to the Municipality of Arezzo. The Fraternity of the laity, still existing today, was born in the ‘200 for charitable purposes and with the aim of commissioning works of art of historical value for the community of Arezzo.

On the ground floor of the museum it is possible to meet an exhibition of medieval and renaissance reliefs and sculptures and stone fragments dating back to the Middle Ages. Sculptures from the churches of Arezzo adorn the adjoining room. The first floor follows a chronological order and presents a rich collection of paintings and objects related to medieval common life, such as coins, weapons and jewelery.

In particular, the rooms host frescoes attributed to Spinello Aretino and his son Parri. It is curious to note that in the museum’s hallway there is one of the largest paintings on the table of the 16th century, the “Convitto for the wedding of Esther and Assuero”, performed by Giorgio Vasari. The museum is completed with an important collection of Italian majolica and houses on the top floor a selection of art objects, weapons and elements in coral dating back to the XVI-XX century.

The medieval and modern art museum of Arezzo is open every day except Monday from 8.30 to 19.30 and admission is free. The building is part of a rich and interesting cultural history and is an integral part of the guided tours organized by the municipality of Arezzo, which help the inhabitants and visitors to discover the immense cultural heritage offered by the city.

Discover all our offers for your holidays in Arezzo.